Well-seasoned tourists may think they have seen it all, from Rabbit Island in Japan to Monkey temples in India. Yet travelers may feel bewildered during Peru’s Fashion Week. No, it is not your typical fashion event brimming with New York and European models. Instead, the glamorous stage is reserved for a rodent: El Cuy. Exactly. The ones doing the catwalk are not models but fluffy guinea pigs.

Andean villages throughout Peru celebrate local festivities in which guinea pigs or cuyes are dressed for an exhibition. The most charming or the one with a picturesque costume gains publicity, a photo shoot and a prize for their breeders. 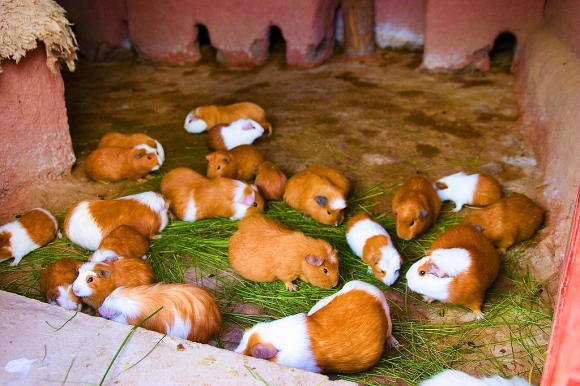 Guinea Pigs are originally from South America. They lived in Andean natural habitats until ancient Peruvians domesticated them around 5,000 B.C. Cuyes were valued as a source of food due to its low-fat meat and high protein content. Easy to raise; Guinea pigs did not need much space and mostly ate alfalfa.

Cuy breeding continued during the Inca era, even if Incas preferred a vegetarian diet. Unlike llamas (which only belonged to the state), guinea pigs could be raised by anyone. Yet Cuyes were not part of their daily diet, only being cooked during festivities. Along with Llamas, Incas attached a deeper religious aura to cuyes. Guinea pigs offered a communication path with Inti (the Sun god). Inca priests used to sacrifice 1,000 cuyes to ensure a bountiful harvesting season. An additional amount was slaughtered before planting maize. As their sacred status grew, cuyes began to be used for healing rituals.

After the Spanish conquest, cuyes were exported to Europe around 1535. It is believed cuyes were sold in England for the price of one guinea (a minted coin.) They were thus named ‘guinea pigs’. In those years, Queen Elizabeth I adopted a Peruvian cuy. She even appeared in her portraits with a cuy on her lap. The Queen initiated the European (and later American) custom of adopting cuyes as pets.

As cuyes were embraced in Europe, things were different in Peru. Being a symbol of Inca culture, Spaniards regarded guinea pigs with suspicion. Around 1560, Spanish priests vainly tried to convert Incas to Catholicism. But Inca descendants still enacted Cuy sacrifices for their Gods. The frustrated Spanish priests agreed in enforcing a Cuy mass extermination. They signed an official petition to Geronimo Loayza, the bishop of Lima. Fearing a massive indigenous rebellion, the bishop rejected the request.

In colonial times, a few Spaniards adopted guinea pigs as pets. Yet the rodents were mostly forgotten. For nearly four centuries, cuy breeders only thrived in indigenous towns. Indigenous people also officiated Cuy healing rituals. Finally, the fate of guinea pigs changed in the 1950’s. A wave of Andean migration introduced Cuy to major cities. Cuy was wonderfully assimilated in Cuzco, Arequipa and other urban centers. A fair amount of Lima residents still did not endorse it though. 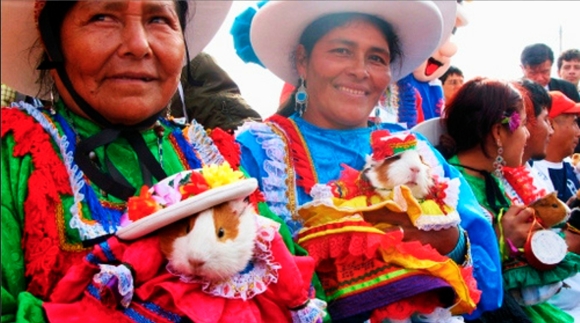 Among peasant communities, Cuy is seen as a food representative of power. Andean residents cook Cuy on important occasions to honor authorities, political leaders, compadrazgos and renowned visitors. Moreover, cuyes became tokens to reinforce social bonding among friends and family. They were the perfect gift for weddings, baptisms, birthday or quinceañeros.

Urbanization, however, transformed Cuyes into a commodity. Cuy breeders opened farms to streamline production on a large scale. In an effort to promote business, Cuy festivals were organized in Andean towns around 1970, and gradually spread everywhere. Today, there are Cuy festivals in Ayacucho, Puno, Cuzco, Huancayo, Huacho, Huanuco, Churín, etc. Each year, the organizers added attractions such as the Cuy exhibition, Cuy Games, Cuy speed races, Cuy culinary contests, Mister Cuy and Miss Congeniality Cuy. In 2001, breeders came up with the Cuy Fashion show. Neither the Incas nor their descendants ever dressed Cuyes before. The publicity obtained proved it was a fine idea.

The Peruvian state elected October 9 as the National Cuy Day. Yet, Cuy festivals are not precisely celebrated on that day. They rather begin in May and perform on different random dates. The fashion show is prepared for weeks beforehand. Competitors take great pains in the design and confection of the garments. Judges select costumes which display creativity, originality, and color. Past Cuy competitors had been dressed as miners, peasants, princes, etc. The prize for the winner fluctuates from 60 to nearly 200 dollars. 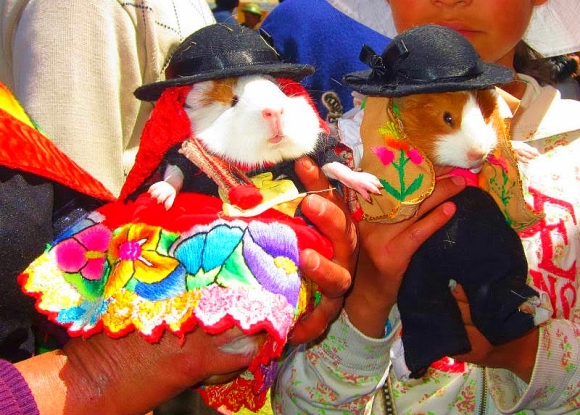 Cuy festivals and their promotion have reaped great benefits. A decade ago, Cuy demand was meager. Today, they’re found in nearly every farmer’s market. Vendors praise its meat for having more proteins than most farm animals. Several eateries in Lima also offer different varieties of Cuy dishes. The most popular are Picante de Cuy and Cuy Chactado. It is estimated that Peruvians eat 90 million cuyes every year. A thousand samples are also exported weekly to the Peruvian diaspora overseas: Japan, Europe, Canada and the United States.

Along with Llamas, Guinea pigs are a key symbol in Andean Peruvian culture.𝔖