It’s a dog’s Life! Everyone has heard this phrase whenever life goes bad. But after meeting Otto, a Peruvian Bulldog, you may say: “It’s a dog’s life, but I wish it was mine.”

Just imagine a SuperDog who not only enjoys a pleasant life but also practices surfing, sandboarding, skimboarding, and skateboarding. Here is a bulldog craving for excitement, adrenaline, and ready to embrace every day as it if was the last. 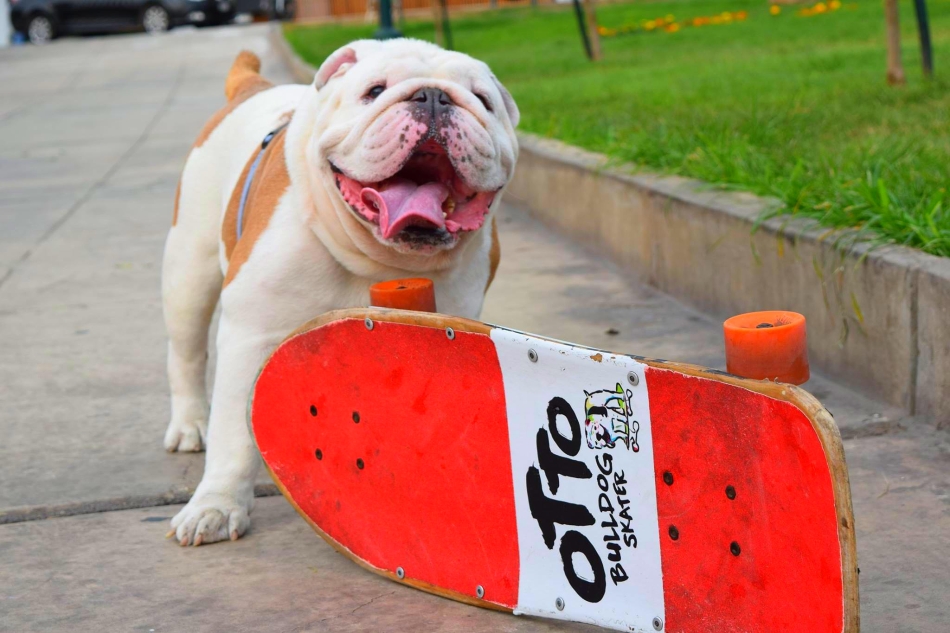 In 2012, Robert Rickards and Luciana Viale adopted a puppy named Otto. Since Otto was so chubby, he was nicknamed Fatty (El Gordo). Mr. Rickards was a fan of the American Bulldog Tillman, the world’s fastest skateboarder. Inspired by Tillman’s example, Rickards decided to get a skateboard for his pup. Days later, Rickards realized Otto had a natural talent and began to train him. This was easy to do since Otto loved playing with the skateboard at all hours.

Some Bulldogs are lazy and overweight, but Otto was the exception. He was agile and energetic; overall, Otto seemed predestined for greatness. He began riding the skateboard at four months old. Months later, Otto was already skateboarding using its four legs. Otto’s skills were perfected by a combination of nature and nurture. Otto’s natural traits were improved by its owners, both experts in sports adventures. Robert and Luciana often visited the southern beaches of Chilca and San Bartolo, and brought El Gordo along. Otto learned surfing and skimboarding and drew the attention of onlookers. After each training session, Otto rehydrated gulping lots of water.

As months went by, Otto performed outstanding feats. This was only the beginning. Journalists and writers alike contacted Mr. Rickards and, soon various magazines had Otto on the front page. 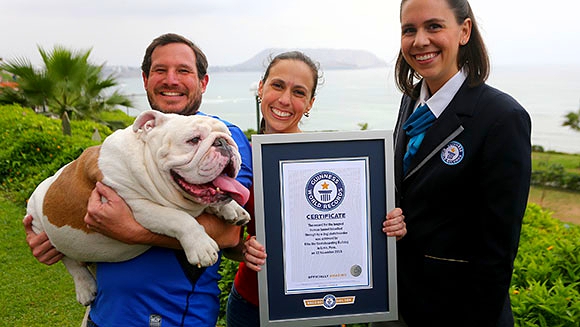 One day in 2015, Luciana was skateboarding with Otto at the park. As Otto was skateboarding towards her at full speed, Luciana opened her legs for the dog to race through her. Suddenly, Luciana had the idea of staging public performances in which Otto skated through the legs of dozens of people. Consecutive events were successful, as more fans gathered to watch the fantastic Bulldog.

On October 2015, Otto’s owners threw a grandiose party for its third birthday. During a TV interview, Robert and Luciana said they had been contacted by the Guinness World Records. The World Records authority had learned about Otto, and were interested in setting an attempt for the ‘Longest human tunnel traveled through by a skateboarding dog.’

On November 12, 2015, at Parque de Miraflores, the challenge took place. Hours later, the Guinness World Record website announced that Otto had made history. They wrote: “The 3-year-old pooch valiantly skated through the legs of 30 humans, who all faced the same direction and stood with their feet apart to allow the talented English Bulldog to pass freely through the human tunnel without being led or touched.”

An excited Robert Rickard posted on his Facebook page: “Otto Made It! A World Guinness Record for Peru and the World! Yeah!!” Global news outlets spread the exciting news.

Besides being a magnificent dog and athlete, Otto is very gentle, willing to provide warmth and love. “Otto is like my own son. He is a true member of my family. My parents love him and even strangers grow fond of him,” Rickard said. His wife Luciana added: “Otto just keeps our spirits up, whenever we are worried or sad about something, Otto does something funny and cheers us up!”

Sandboarding, surfing, skimboarding, a loyal family member; could one ask for more? After writing about Otto, we feel reassured that a day without adrenaline, adventure and love is not worth living. And Otto has given us a great example.

It’s a dog’s life, and we all should learn from the great Otto.𝔖