After enjoying Ceviche for two millennia, Peruvians must know something about it. Disregarding their culinary trends, there is still something that goes beyond any ingredient or technique. Asked about the ‘real secret’, Peruvians would agree there is a mystery nobody can pinpoint. Such ‘magic’ can only be manifested by tasting their multiple Ceviche styles.

Aside from the recipes invented by Peruvian Chefs, we must pay heed to the contributions of their people. It is quite astonishing, not only in the range of ingredients but also their presentation. Every region has contributed something of their own, adding local ingredients which make their ceviche quite authentic.

Some recognizable trends abound in particular regions. For example, in the cities of Tumbes, Chiclayo and Piura, Ceviche is served with fried plantains. Yet in Lima, Trujillo and Chimbote, their plates include sweet potato, seaweed, and toasted corn. But these only represent bits of the infinite variations one may encounter while traveling throughout Peru.

Here are some examples:

Arequipa locals, or Arequipeños, used to boil shrimp before making ceviche. Shrimps were placed in a ceramic pot to be cooked by a fire made by stones. However, some Arequipeños preferred their ceviche warm and poured the rest of ingredients into the pot. This sauteé dish was called ‘Hot stone shrimp ceviche’ or Ceviche de Camarones a la Piedra.

Originally from the Andean town of Junin, this dish stands out due to its flavorful orange-colored fish.

Trout was first brought to Junin by mining Corporations around 1930. Trout fertilized eggs were bred in Junin lake, near the mining town of La Oroya. Junin miners went out fishing at their lakes on their time off and came up with this recipe.

Peruvians are also eager to experiment with vegan recipes. Along Asparagus Ceviche, we have the Mushroom Ceviche. Mushrooms are briefly boiled and topped with garlic, parsley and ginger. Connoisseurs rather enjoy it in the eateries of Chorrillos’ district.

As one of the world’s top Asparagus producers, Peru yearly exports 70% of its production to the US. Most of it comes from the region of Ica. Its ideal climate produces asparagus of the finest quality.

Excluding the fish, Asparagus Ceviche has the same ingredients as a regular Ceviche. Other versions include black olive and mushrooms. This ceviche type is exhibited in Ica’s gastronomic festivals and served to tourists in many restaurants’ hotels.

Arequipeños claim Ceviche comes from “Sivinche”, a shrimp dish the locals prepared with vinegar. As most etymological theories of Ceviche, this one is also unproven. Yet it is undeniable that Arequipeños have enjoyed Ceviche for centuries.

Sea urchin ceviche is quite trendy in Arequipa. Chef Gaston Acurio reveals that the best sea urchin comes from Atico district, especially during high season, running from August till November. Urchin has a salty taste which combines perfectly with lemon juice. Oh, it is also a magnificent aphrodisiac.

Silverside, or Pejerrey, is the cheapest fish in Peru’s markets. The secret for a great Ceviche lies in picking silversides displaying shining dorsal fins, which reveal their freshness. This plate is all the rage in the seaport district of Callao. Some popular kitchens or huariques refined their skills to specialize on this dish.

The origins of Tiradito, a Peruvian Sashimi, has been widely debated among historians. While some attribute to it Italian and Japanese influences, others boast its coastal roots. Many experts don’t even consider it a type of ceviche. What makes tiradito quite original is a special ají paste which is often its main and only ingredient. Some people enjoy Tiradito while sipping pisco sour.

Arapaima, also known as Paiche, is a freshwater fish inhabiting the Amazon River. Paiche has sustained the diet of local tribes, and it’s now been bred by fish farming industries. 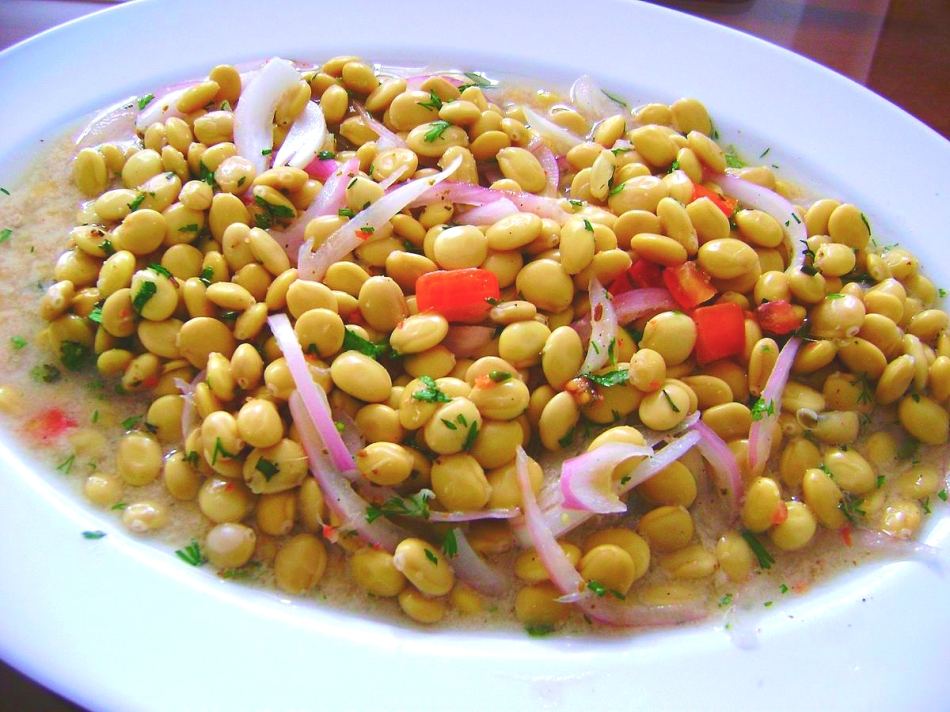 Better known as Cebiche de Chocho, its main ingredient is tarwi, a legume grown in high altitude towns. Andean women ate tarwi due to its nutritive content. Lore tells that, after getting tired of breastfeeding, women gave their babies Tarwi. This is why Tarwi is also named Chocho, since the Quechua Chucho means ‘breast.’

Tarwi is boiled for hours before mixing it with lime juice, onions and cilantro. Street hawkers sell Tarwi Cebiche in plastic bags.

For centuries, Arequipa locals extracted Shrimp from the rivers Majes, Camaná and Ocoña. Their fresh catch was paramount to make Shrimp Ceviche. After formerly marinating it with either vinegar or lemon, many Arequipeños now prefer to use squeezed orange juice.

The shrimp must be pre-cooked, although many skip this step to preserve its flavor. To make it spicy, they don’t slice the usual ají but red pepper instead, also known as ‘Rocoto.’

Cajamarquino Chef Victoria Rivas claims her mother invented this dish forty-two years ago. Cajamarquinos worship Victoria’s Ceviche and say its flavor is unbelievable. “The secret is to add the Criadilla fluid to the lime juice…,” she says.

Flounder, the most expensive fish in the market, has been dubbed the King of all fish. Many believe that ‘Flounder Ceviche’ is the finest Ceviche one can ever taste. Many restauranteurs in Peru place blackboard signs on the sidewalk advertising ‘Flounder Ceviche.’ Clients know that, despite its price, this ceviche will be worth having.

Other chefs say that fish species as Cojinova, Corvina and Grouper are better for Ceviche. 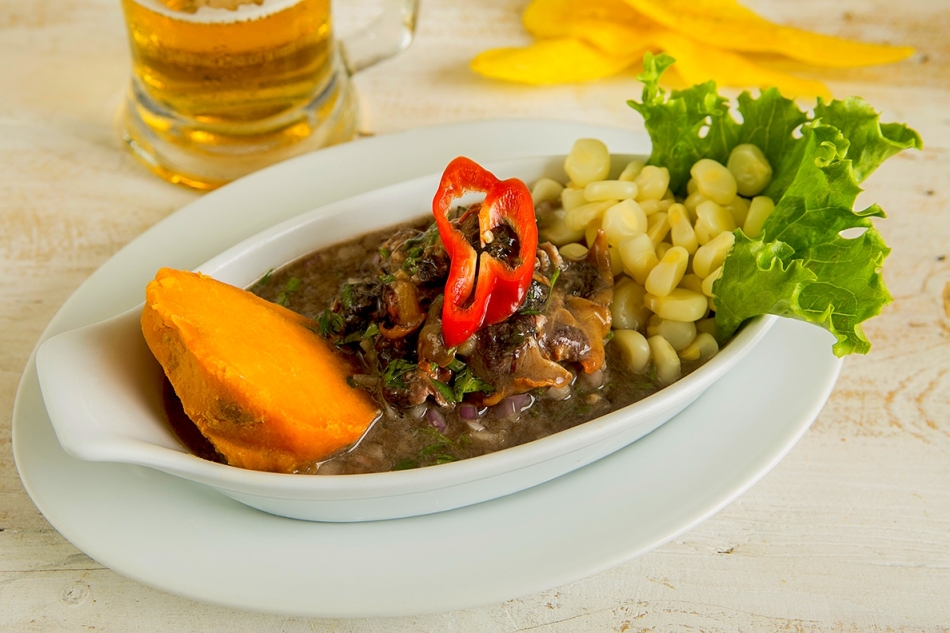 This dish was part of the daily diet of Tumbesino fishermen. Nowadays it is massively enjoyed in restaurants based in coastal cities. The demand for black shellfish has been such that even the government imposed restrictions on fishing.

The dark juice of Shellfish is used to prepare the local version of Tiger’s milk: Panther’s milk, which has sliced bits of fish, shellfish, and lemon.

Ceviche Mixto or Seafood Ceviche includes shrimp, shellfish and fish. This is undoubtedly the most popular dish for Peruvians fond of seafood. Limeños usually have it during the summer, while laying down at the beach with a cold beer.

Besides its magnificent taste, Cuttlefish, a cousin of the squid, is rich in proteins. Cuttlefish is widely used by street Cevicheros in Lima. After placing an order, this dish is cooked right on the spot with fresh lime juice and chopped onions. This is likely the cheapest bite one may find while strolling on the streets.

The Guitarfish is caught in the seas of the northern region of Lambayeque. Its preparation is unique since its fillets are dried for weeks beforehand. Right after, the fillets are frayed and ready to be mixed with onions, salt, and ají. People in the region have it with cassava or corn.

If these dishes have literally left you drooling over your screen, there’s one thing left to say.

We can totally understand the feeling.𝔖